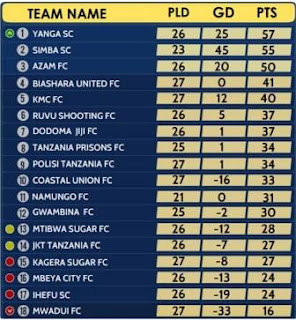 This is the standing of the Premier League in Tanzania Mainland after 3 matches which have been played this Wednesday at different regions.

Simba have succeeded to get a victorious match with a score of 2-0 over Kagera sugar at Kaitaba Stadium.

Ruvu Shooting also emerged with a 5-1 victory over Mwadui FC at Mabatini Stadium.

Mbeya City also emerged victorious with a 1-0 win over Polisi Tanzania in a game held at Ushirika Stadium in Moshi.