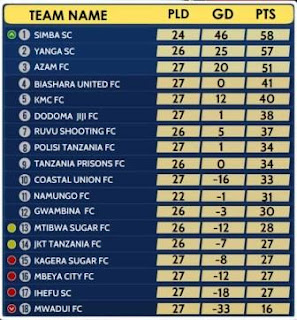 This is the standing of Tanzania Premier League after 2 matches which had been played today where Simba win 1-0 against Gwambina and Mbeya City also win 1-0 against Namungo FC.

As a result, Simba now leads the League with 58 points ahead of Yanga which have 57 points.

Simba SC still have 3 games in hand and Yanga still have 1 game to reach the 27 games that other teams have played.