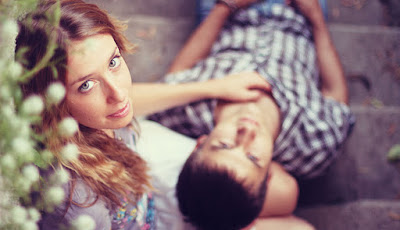 It’s the little things in life that hold the most meaning, the most beauty and power. While an army of men couldn’t move a mountain, a single atom can unleash enough power to level it entirely.

1. When she texts him good morning.
Believe it or not, when a guy loves his girlfriend, he loves seeing a text from her first thing in the morning. Well, he’d prefer to see her lying next to him in the morning, but when that isn’t an option, a text will have to do.
It’s always nice to be reminded that there's someone out there thinking about you the moment she wakes up...

2. The way she lights up when she sees him.
There is nothing more beautiful in this word than a woman in love. And there's no better feeling in the world than knowing you’re the one she’s in love with.
He loves the way his girlfriend’s eyes glow when they come meet his. It's such a simple thing that holds so much beauty.

3. When she buys him little gifts, letting him know he’s always on her mind.
Sometimes, it’s a T-shirt. Sometimes, it’s a fruit bowl or some chocolate chip cookies. While he sees them as gifts, she doesn’t -- and that’s what he loves most about it. She simply sees something she believes he will like and can’t help herself from buying it for him. She cares for him, and he loves it when she shows it without even really knowing she’s doing it.

4. When she looks at him and actually sees him.
People feel alone not because there isn’t anyone present in their lives, but because they don’t feel present in anyone’s life. Truly being a part of someone’s life requires a level of understanding that only true love allows for.
He loves when his girlfriend looks into him to see the true him, because at the same time, she’s letting him see the true her. And he doesn’t feel so alone anymore.

5. When she cheerleads for him.
She’s his biggest fan, biggest supporter, biggest believer. She believes in him more than he believes in himself. And every time he approaches a challenge, especially when it’s one that he himself doubts he can overcome, she is there to remind him that he’s stronger than he knows.
He’s been waiting his whole life for someone that sees the good in him, and now he knows he’s found her.

7. When she looks incredibly beautiful without even trying.
He doesn’t know how she does it. She can be dressed like a slob, hair a mess, running a fever and a runny nose, and still somehow manage to take his breath away.
That’s the funny thing about love. It manages to find beauty in places where others fail to see it. Which, if you think about it, is exactly what makes it so powerful.

8. When she gets excited over the little things.
He loves seeing her happy. He loves the way she smiles and bounces about, hardly able to control herself. He loves how she’s able to find beauty and happiness in the simplest of things.
Most of all, he loves how much he loves how excited she can get. He never thought he could find so much pleasure in someone else’s joy.

9. When she tells him she loves him.
It’s not only women that need to hear it from time to time. Men do as well.
She may not realize it, but every time those three words slip from her lips, he’s filled with elation. He loves her and loves that when she tells him she loves him, she means it with every atom in her body. He knows that for a fact because… well, because he can feel it.